Features
The system can now optionally send employees a notification e-mail whenever they are assigned a Form. Ideal for businesses where users don’t often check their mobile app! This feature can be turned on or off for the whole organization under Your Account → Company Profile → Notify form assignment by email.

As a user editing a form template, you can now optionally require a Safety Rep signature similar to requiring a Manager or Supervisor signature. Note each mobile user must upgrade their device to the latest version of mySafetyApp to see this option. 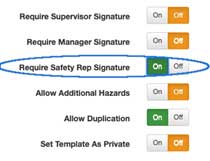 As per our “Notice to Android users” sent October 31, Google now prevents us from delivering Android fixes optimized for Android version 8 and earlier. In our testing, we have not seen issues with this, but if a user encounters undesired behaviour, we can’t guarantee we’ll be able to offer a resolution until they are able to run the app on Android 9.

The text on some Forms when printed out was very small – in these cases the text is now larger and easier to read.

In the Form Exporter utility, fixed an issue where the “add all” feature would add fewer forms than expected.

Fill out the Form Below: